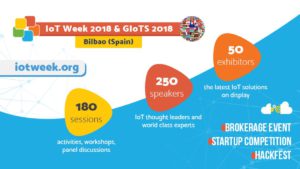 From 4 to 6 June, Luca Bolognini will be a speaker during the #IoT Week 2018, one of the most influential conferences about the IoT, hold in Bilbao (Spain).

Some of the topics covered during the week will be:

For more details on the scheduling of the days and the topics covered: http://ow.ly/Scyl30khX9y